Yes, we had so much fun playing in a sea of blue sponges (foam blocks to be exact) at Kaboodle Kids some weeks back, and we've got passes to share with our readers!

Kaboodle Kids is Singapore's first and only indoor playground that uses Imagination Playground, these includes bricks and cylinders, accented with chutes, channels and parts that suggest motion or connectivity. They inspire children to design their own inventions, environments and activities. 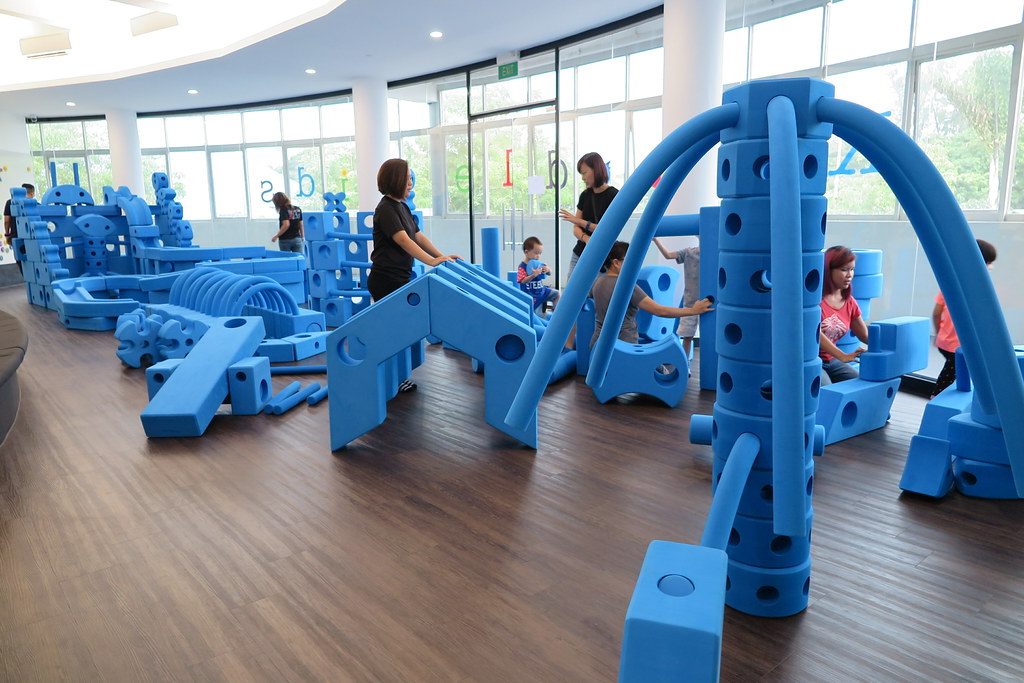 This greeted us that morning when we arrived, built by the experts at Kaboodle Kids.[/caption]

When we arrived at Kaboodle Kids at East Coast Big Splash, the pieces were built and they place look so fun! Both Ayra and Zara were excited when they saw what was waiting for them, and went straight to play mode the moment they got their socks on and hands sterilised. 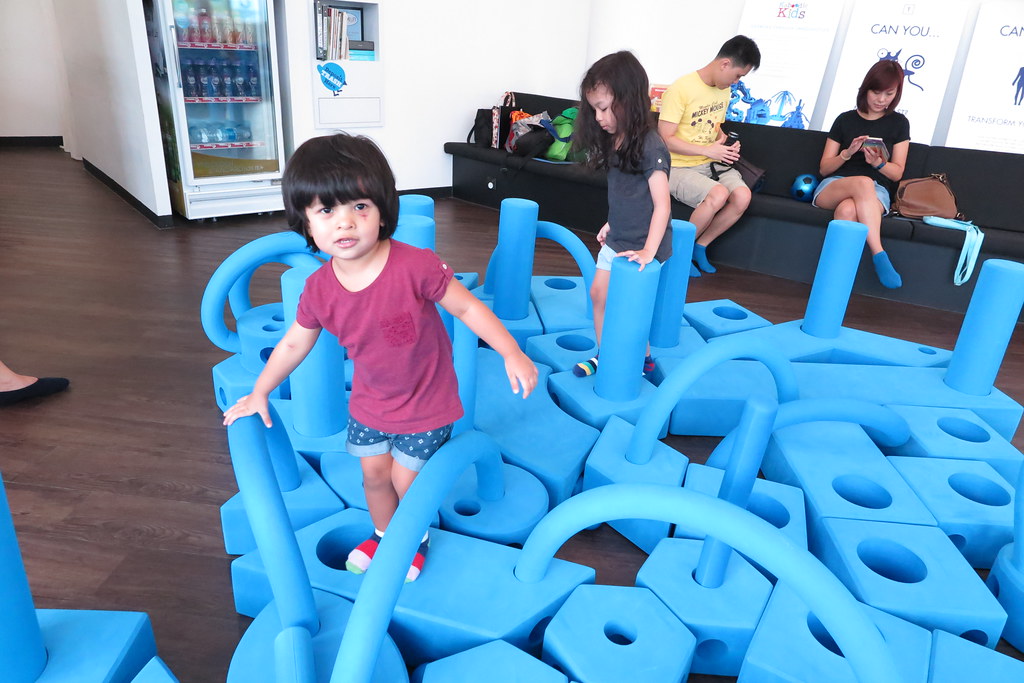 The girls started pushing blocks together and then this was formed. Some obstacle course or sort perhaps?[/caption] 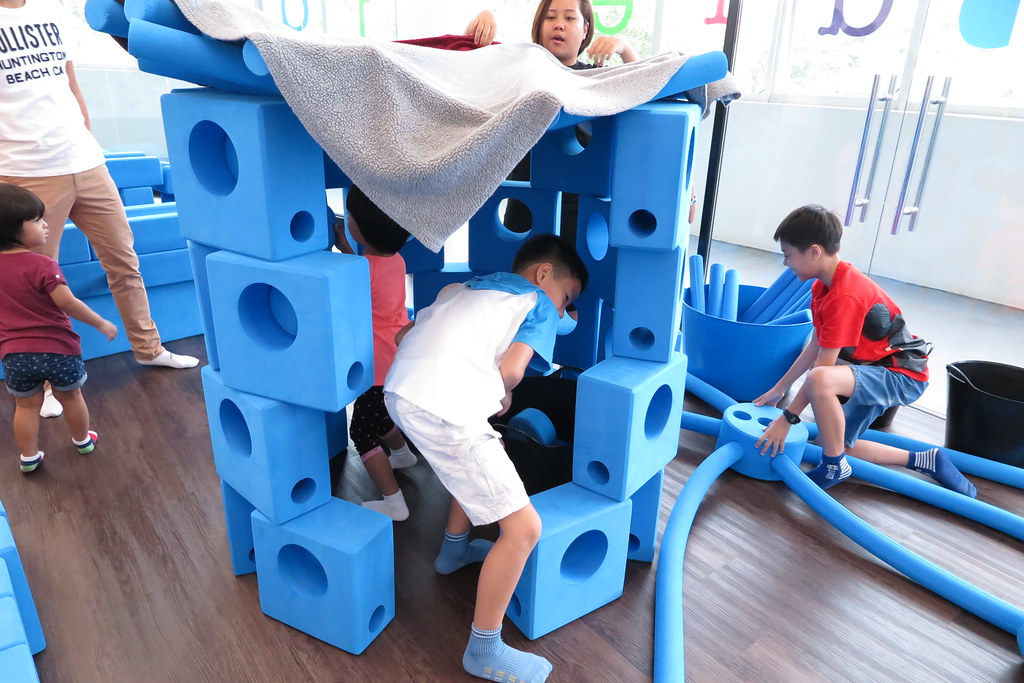 These modular, rectilinear parts are easy to stack, line up and move around. The kids and parents who were with us that day at Kaboodle Kids enjoyed endless play with these blue blocks! Most importantly, everyone were engaged, active and had lots and lots of fun. Both my girls were super tired after 2 hours in there but they refused to leave. 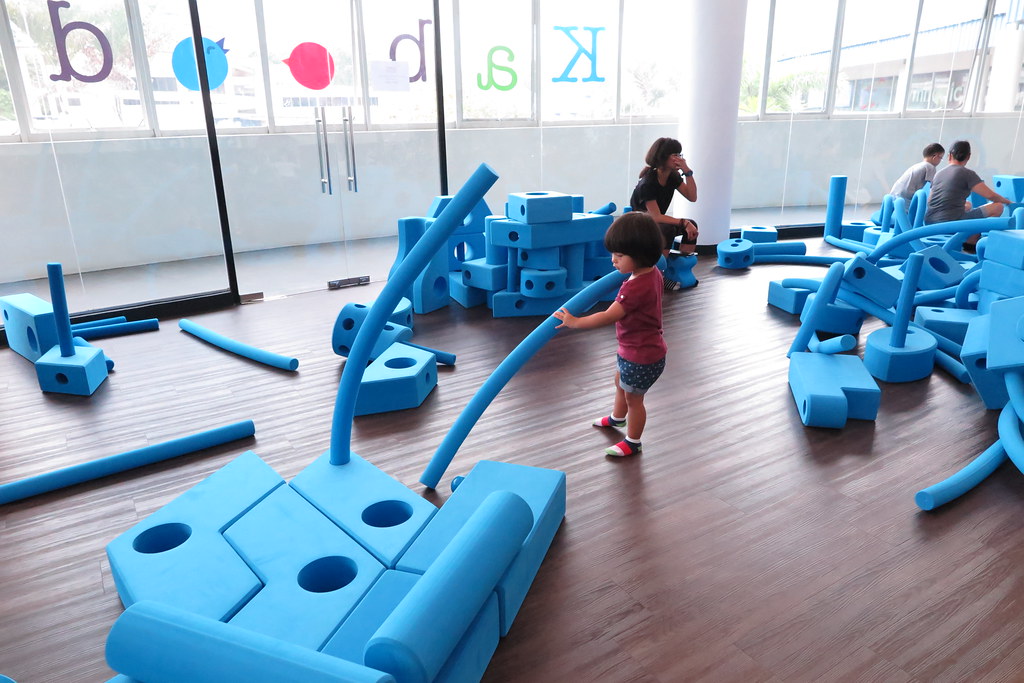 What I love about this play system is that my girls can do whatever they want in there and I don't have to keep close to them to ensure their safety. The space is designed such that parents can just sit and chill along the long stretch of seats and watch the kids play. Or we can join in the building and playing fun! The girls were kept busy the entire time we were there and I didn't have to encourage them to try out anything, they just go around doing their own things with their own imagination. I was very impressed that these blocks are able to maintain their interests for that long. If only our home is big enough! LOL! 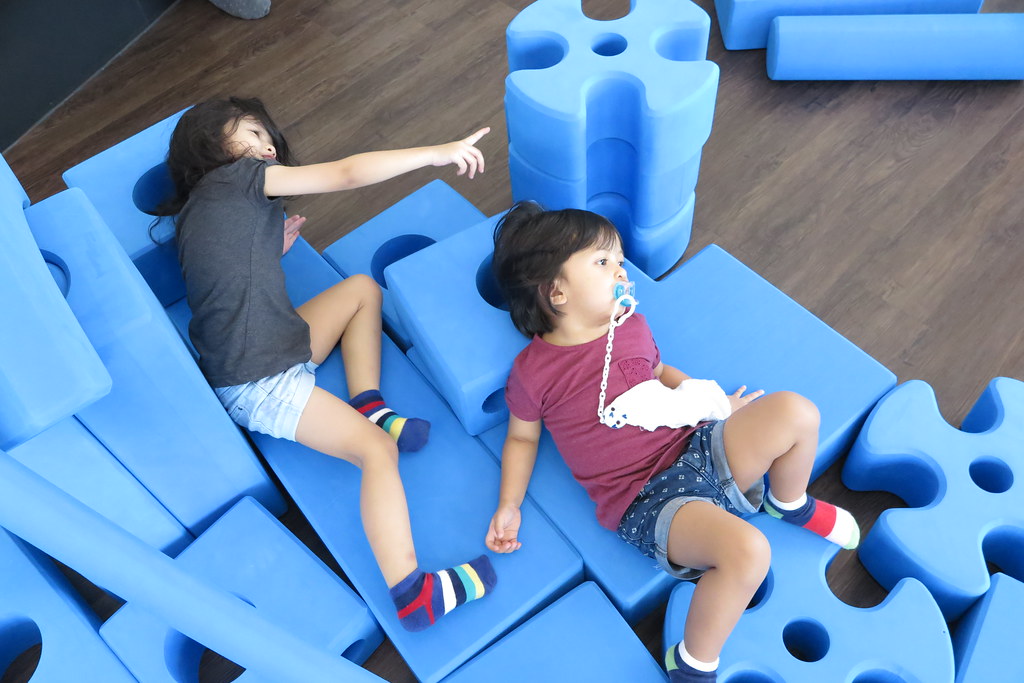 These blocks make good resting beds when they get tired. Obviously need sleep but they just didn't want to leave![/caption]

See some of the things we did in the video I compiled from that day.

I do hope they start another outlet soon where it is more accessible by train, I would bring my girls there often for sure! 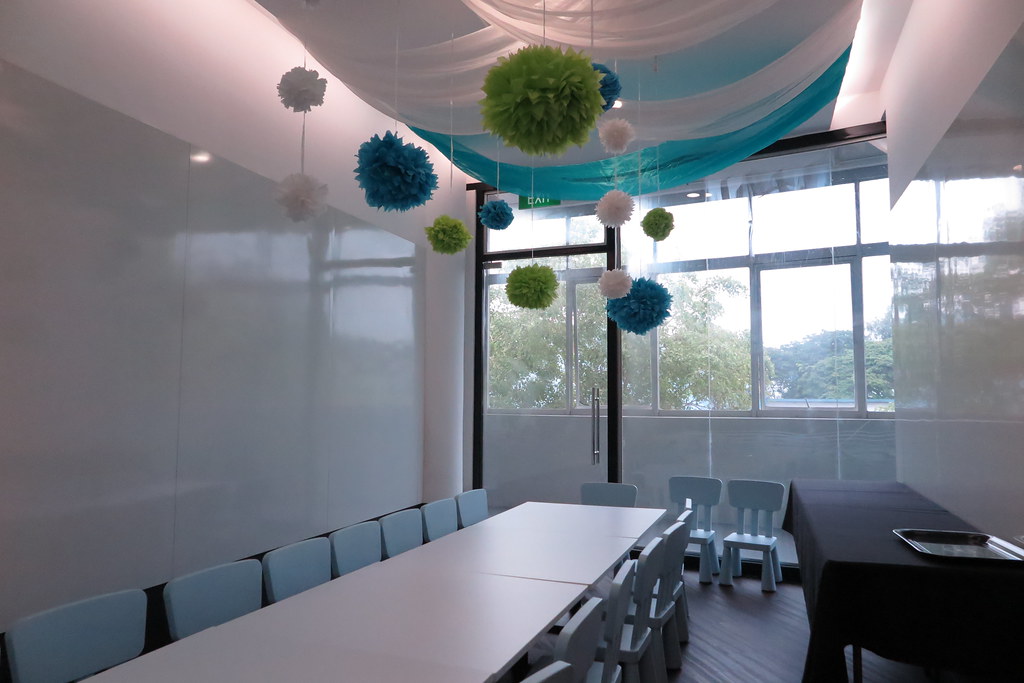 A well thought out party room at Kaboodle Kids! With a washing sink, whiteboard walls for decorations and creative drawing, basic party ware and accessories too.[/caption]

They are currently having a promotion for party room booking, check their Facebook page for details.

Kaboodle Kids also has a party room where you can bring in your own food and beverages or they provide catering options too. That day, we were treated to super yummy food from one of their caterer, Pondok Gurame Indonesian Restaurant located at Big Splash too. The kids and the parents all enjoyed the food served, it was delicious! 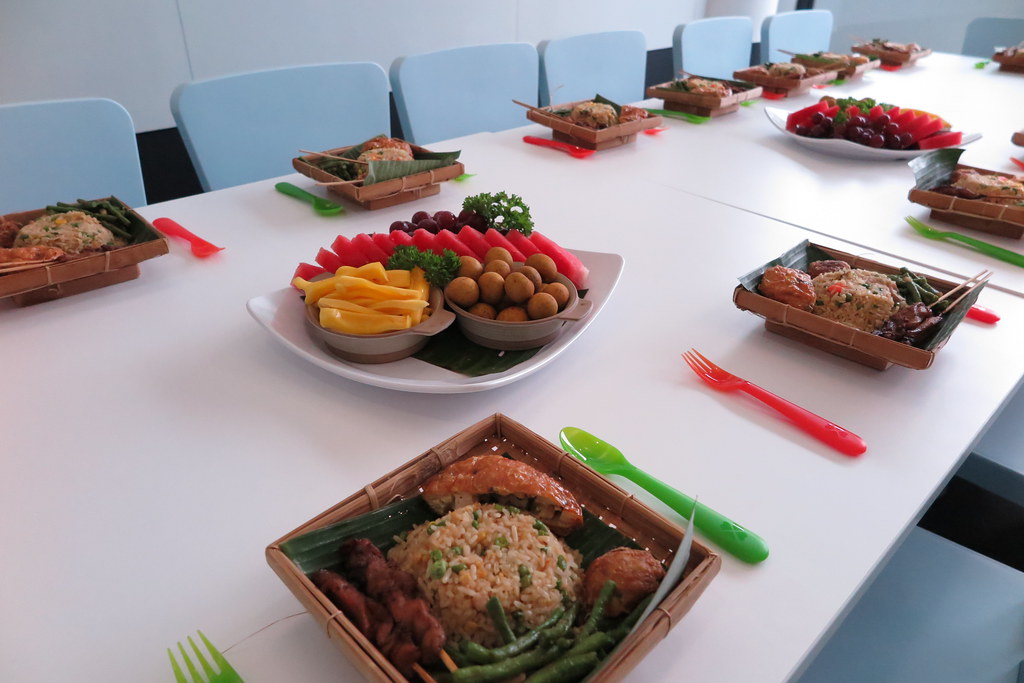 A different kind of kids meal and it was so good! Better than the usual party food.[/caption] 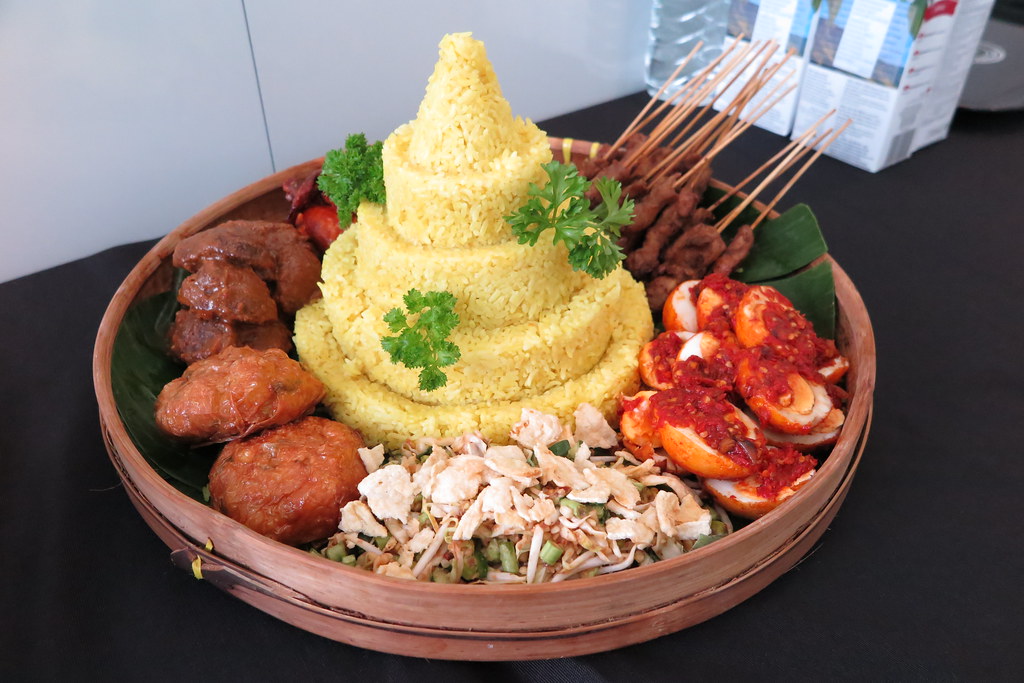 And finally you can get decent and delicious adult food at kids party! This one was amazing![/caption]

If you have not heard or been to Kaboodle Kids, here's your chance!

We've got 10 play passes to giveaway to our readers and fans. Each play pass entitles ONE child and TWO adults for unlimited play on weekdays and 2 hours of play on weekends/public holidays. Play pass is valid till 31 March 2016. To win yourself one, simply follow these steps:

Giveaway ends 31 January 2016. Winners will be contacted via Facebook. 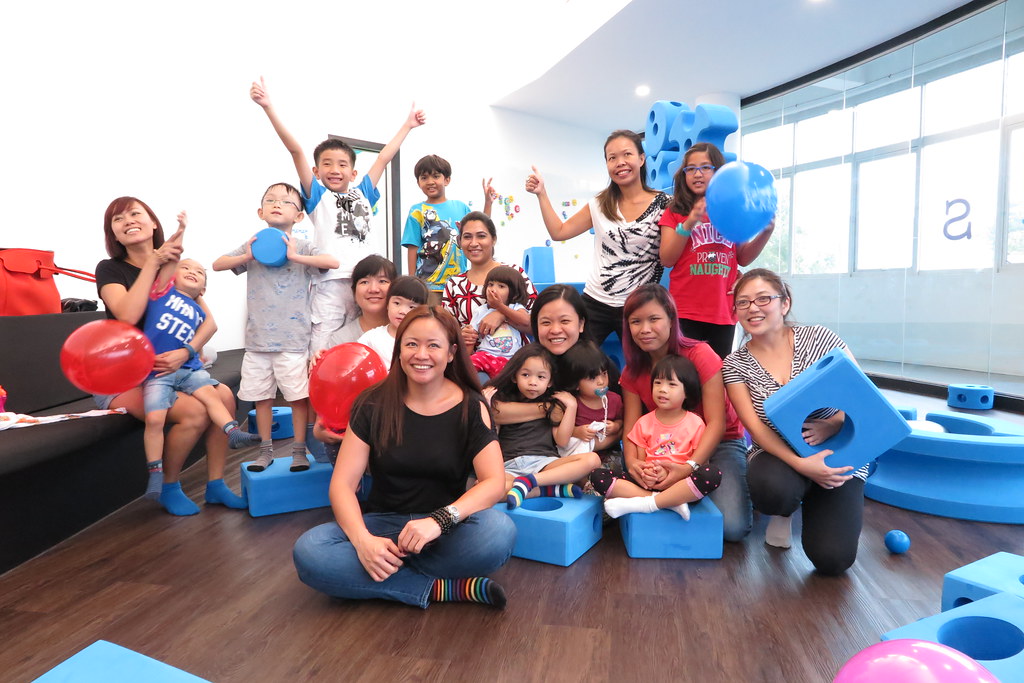 Awesome fun time at Kaboodle Kids with Singapore Parent Bloggers! Find out more about us at http://singaporeparentbloggers.com.[/caption]

Started in 2014, Kaboodle Kids uses Imagination Playground to encourage children to develop their imagination and creativity, as well as nurture their emotional, physical, social and cognitive development through play. Kaboodle Kids offers great parent-child bonding through play, and believes that children should not be too fixated on academic achievements and also make time for creative play. For more information, visit www.kaboodlekids.com.sg and check out Kaboodle Kids on Facebook.