Be the 2018 Ultimate Football Family Here's How + Giveaway!

on June 19, 2018
Get your football fix at the inaugural Singapore Sports Hub Festival of Football!

Held from 14 June to 30 July at the OCBC Square, the festival is set to be the home to Singapore's largest celebration of the beautiful game. Catch the live football action as we screen most matches, including all knockout stage matches as well as the final, LIVE on a mega 66sqm LED screen!

The venue will be transformed into a gigantic football fan party, with a range of offerings such as EXCLUSIVE ticket promotions to the 2018 International Champions Cup in Singapore and Singapore Premier League matches, meet-and-greets with local football heroes, football-themed activities for the whole family, live entertainment and music acts, food and beverage, as well as daily prizes, which will delight guests from all over. Admission is FREE.

The Singapore Sports Hub Festival of Football will culminate with the 2018 International Champions Cup in Singapore come end July, which will see European powerhouses, Atlético de Madrid, Arsenal, and Paris Saint-Germain play at the National Stadium.

From 14 June to 15 July, the search for Singapore’s Ultimate Football Family is on! Attend the live football screenings and stand to win flight tickets and accommodation to watch your favorite International Champions Cup team play at their home ground! There are also ‘Money Can’t Buy Experiences’ such as the opportunity to be a player escort at a 2018 International Champions Cup in Singapore match.

Simply complete the Ultimate Football Family Card, post your experience at the Festival on Facebook and/or Instagram, and purchase a 2018 International Champions Cup in Singapore ticket to participate.

Most matches of the beautiful game including all knockout stage matches as well as the final will be screened live on a mega 66sqm LED screen at the OCBC Square.

Complete with football-inspired decorations, the OCBC Square will feature seating areas on artificial turf with bean bags and benches for friends and families to bond over the beautiful game.

Football-themed Activities for the Family

You can also bring your family down for an urban picnic, and enjoy watching movies such as ‘Kallang Roar the Movie’, ‘Goal!’, ‘Bend It Like Beckham’, and ‘Kicking and Screaming’. Free popcorn will be given out, while stocks last.

The Young Lions, together with players from the Home United Football Club, will be here at the Home of the LIONS to engage fans and inspire the younger generations as they share their journey to becoming professional football players.

Football tournaments to be held at the mini football cage

Look forward to celebrity appearances, comedy acts and local favorite bands perform on stage throughout the Festival. Youth performers from the National Youth Council will also be showcasing their talents during the weekend parties at the Festival.

Riding on the success of the West End Bar and the Makan Hub at the HSBC Singapore Rugby 7s, this food and beverage concept will make its return at the Singapore Sports Hub Festival of Football.

For more details on the Singapore Sports Hub Festival of Football, visit www.sportshub.com.sg/FOF.

Here's your chance to win one of 3 goodie bags to go with all the above Football Manic!

Each goodie bag includes prizes worth up to $200 as follow:

Giveaway ends on 21 June, Thursday at 12pm. Winners will be contacted via email with collection details and must collect the prize at the National Stadium on the date provided. *Due to the dates of the games, you must reply to the winning notification within 12 hours from the email timestamp, otherwise, another winner will be picked. Standard T&C applies.
2018 International Champions Cup Family Activities Festival of Football Fun For Free Giveaway Let's Go Out Let's Play Live Football Screenings in Singapore Singapore Sports Hub SSHFestivalofFootball Ultimate Football Family World Cup 2018

Most Viewed By Readers

I love my mobile phone a lot, but after stalking my friend’s travel photos she took with her Google Pixel 3, I wanted so bad to try it out myself. Thanks to the PR team for Google, I managed to borrow a Google Pixel 3A to test it out for our winter family holiday to Gold Coast and Sydney in June.


The only thing I missed was the ability to go wide angle (available on my Huawei Mate 20 Pro), but other than that, I found myself shooting more on the Google Pixel 3A during this trip. And my girls love the “Playground” mode on the camera!

In Playground camera mode, we are able to add in multiple AR objects into our photos and videos. The girls love it and can’t stop asking for the “grey” phone to snap photos with Pikachu and friends!
They named it grey cos the phone case that Google sent was the very nice Google original grey fabric case. Love holding on to the phone with this case, gives it some texture for better grip too!

It had been 5 years since we painted our girls’ playroom and the thought of painting our house again makes me kinda anxious, especially when it’s the living room we’re talking about. The thought of going through such a massive job in the house soon after we changed the flooring just a couple of months back gives me a headache. But the house just doesn’t seem cosy enough since we changed the flooring from dark brown to a lighter shade of brown. The dull grey wall which we got since the day we moved in 7 years ago just doesn’t blend well with our new floor.

It was before Chinese New Year that we made up our mind to get professional help with our home painting. We contacted both Nippon Paint and Dulux to enquire on their professional package and finally decided to go with Nippon Paint because of their prompt responses and professionalism during our consultation. 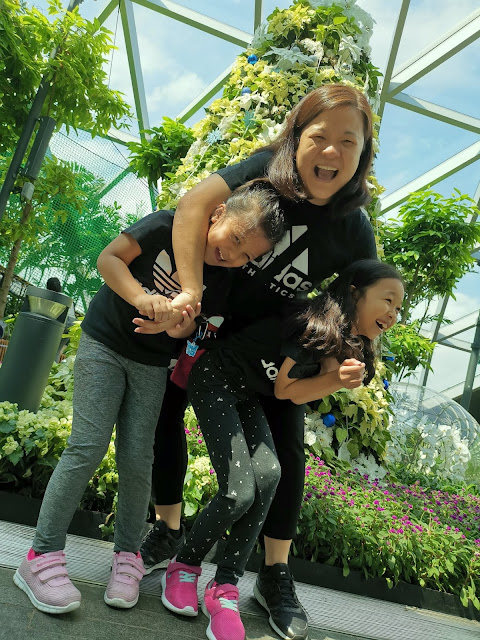 2019 A Year of Challenges and Blessings

Life is the one thing we may think we can control if we plan well and coherently, but it really is the single most uncontrollable and uncertain element in our living days.

This year, in twenty nineteen, when I thought life could never be any more challenging than what we were going through, another stressful and uncertain matters were thrown at me. Those months, even till today, are such a stressful time I thought I would never get out of the anxiety and pressure. Every day I live my days with a such a tight chest sometimes I felt I could never take another breath without passing out. In the night, I would have such vivid dreams and visions, its almost as if I wasn't asleep and was there in person experiencing all those anxiety and stress, 24/7, it just never seem to stop no matter how hard I try to.
These challenges from 2019, unfortunately, isn't going to leave me as it is, and will continue to challenge me and my sanity in 2020. For how long I really don't know. These a…