A Whole New World of Fun with Disney Aladdin

Everyone knows the story of Aladdin and his magical lamp with a genie. But the Aladdin in Singapore now is a whole new world of fun and entertainment!

Magical is the stage set, transforming through the performance bringing us into the world of Agrabrah. What makes theatre show such a treat for me is the innovation and creativity behind all the stage setup, and the smooth transformation in between scenes. My favourite set has got to be inside the Cave of Wonders. It is Beautiful! Filled with 120 piece of gold on this set, see if you can spot the real from the props here. This is also the most fun part of the show!

You know, the part where Aladdin rubs the lamp and the Genie appears? Gareth Jacobs is da man to watch and I mean really watch when you catch Aladdin at Marina Bay Sands. The only stop in Asia, this show is worth your traveling here to Singapore! Genie was fun, super vocal and an awesome entertainer who had too much chili crab when he was stuck in the lamp. Feels like dancing here with all the singing and dancing by the talented performers. Bravo Genie! 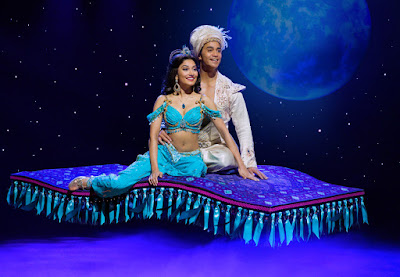 Heart melting moments aplenty whenever Aladdin meets Jasmine. There were many “Aww… Ahhh… Oh….”, going on among the audience whenever their eyes connect. These two sparks so much love and sparkler in their performance. Well for me, from where I was sitting, whenever Prince Ali appears, my eyes would get suck into his sweaty chests…!

So much glitter and dazzle for a date night out! Every people at Agrabrah not only can sing and dance but they have the most beautiful costumes ever seen in the theatre, in my opinion lah.

Disney Aladdin is a show you must catch for all young and old, so book your tickets and bring your whole village. Show runs till 1 September 2019 at Sands Theatre, Marina Bay Sands. Tickets from SGD 68 from Sistic.